The Agricultural Development Bank (ADB) has been awarded the One District, One Factory (1D1F) Financial Service Provider of the Year at the 2021 Ghana Manufacturing Awards (GMA), held at the Kempinski Hotel, Gold Coast City in Accra.

The honour affirms the bank’s support to businesses under the government’s flagship industrialisation programme which seeks to build or revamp a factory in each District in the country for sustainable job creation and also to take advantage of the Africa Continental Free Trade Agreement.

Since the launch of the initiative in 2017, the bank has supported about 20 companies with a total amount of over GH¢100 milion in the areas of agro processing, aquaculture, poultry, construction and manufacturing.

The beneficiary regions include, Bono, Ashanti, Greater Accra, Eastern, Volta and Central region with the highest beneficiary industries being in the areas of agro processing and the poultry industry.

The Managing Director, Dr John Kofi Mensah expressed his excitement about the awards and said the bank was ready to support companies with all the needed financial support especially in the area of agribusiness.

“Being an agribusiness focused Bank, we take particular interest in the area of agribusiness and since it is an area that goes beyond just job creation but also food security, he said.

Dr. Kofi Mensah said, the bank has a dedicated desk for the 1D1F programme and all proposals were properly scrutinized to ensure the companies and the projects to be embarked on were sustainable and will create jobs for the youth.

“We are proud to be the winner of this award, we have been a key supporter of 1D1F since its inception and this award goes to show that our efforts have been duly recognised, we dedicate this award all our customers who continue to show that with the right financial support, economic growth is guaranteed”.

“To the businesses who think they are unable to access support for growth and expansion, ADB is here for you. This award indeed shows that we are the bank ready to support industrial growth,” he said.

The awards programme, which was on the theme: ‘Leveraging on AfCFTA; the role of 1D1F’, saw 28 outstanding companies and individuals from different sectors awarded for resilience, transformative initiatives and excellent. Seven others were also honored with special awards.

Minister of Trade and Industry, Alan John Kyerematen, in a speech read on his behalf as the guest of honour, stated that government’s comprehensive industrial transformation programme, initiated since 2017, is on course to making the country a leading manufacturing hub in Africa.

He indicated that 232 1D1F factories in 154 districts are at various stages of implementation, which includes 64 existing companies that are in expansion and 162 new companies. “Projects operating under 1D1F-76, under construction-107, ready to commence construction-36,” he added. 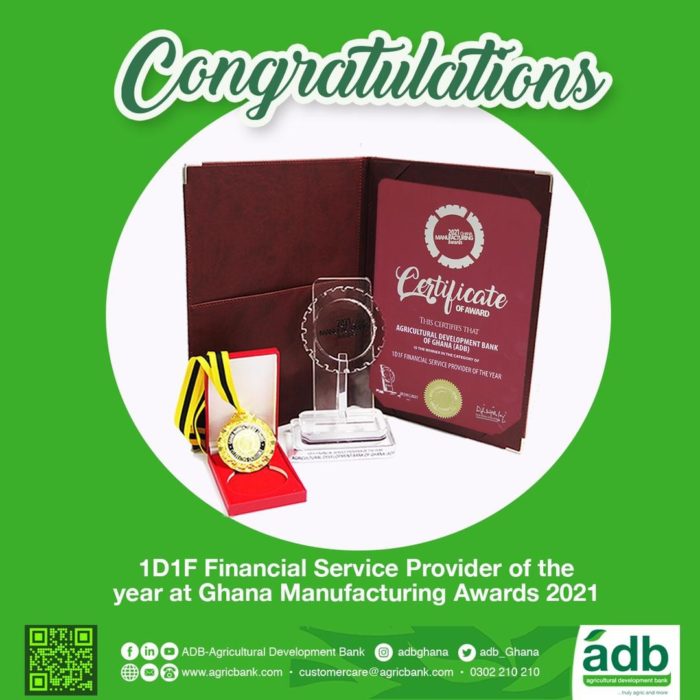