The Agricultural Development Bank (ADB) has handed over the prize package to the Charles Gyamfi, the 2019 National Best Farmer, in the courtyard of the Ministry of Food and Agriculture (MoFA) in Accra.

At the presentation ceremony, which was attended by the Minister, Owusu Afriyie Akoto, and Executives of the Bank, a cheque of GH¢536,000, equivalent to US$100,000 as at last year December, was presented to a very grateful Mr. Gyamfi.

Managing Director of the bank, Dr. John Kofi Mensah lauded Mr. Gyamfi for his detailed proposal which spelt out the projects that the prize money would be used to finance.

“Mr. Gyamfi indicated that part of the award money will be used to expand his existing farm by purchasing productive inputs; part will be used to acquire and install irrigation facilities, a noble proposition in the light of erratic weather conditions.

“He also intends to construct a warehouse to store his farm produce; improve access roads to his farm through gravelling and construction of drains. Part of the award would also be utilized to construct additional farm houses to house new staff to be employed. With the proposed expansion, the 2019 National Best Framer proposes to employ additional 30 permanent staff.

I believe these projects as outlined by Mr. Gyamfi are critical to the expansion of his business and as a Bank we will be providing him with a dedicated Relationship Officer to assist in ensuring the proper utilization of the money,” Dr. Kofi  Mensah said.

He stressed that ADB remains committed in ensuring that agriculture sector continues to play its critical role in our economic growth.

Touching on the Bank’s strategy, Dr. Kofi Mensah noted that since last year, ADB has undertaken many key changes to ensure that its audacious goal of 50% of total loan portfolio being given to individuals and organizations in the agricultural sector becomes a reality.

“The bank would continue to partner government especially your Ministry to implement programmes and projects aimed at modernizing agriculture and improving the standard of living of our farmers and fishers,” he added.

The Minister, Dr. Akoto, complimented ADB for its renewed plan to support agriculture. He urged the Bank to increase its portfolio to the farmers directly. “I am happy ADB is increasing its loan to agriculture but what I want to see is ADB total dedication to the farmers and fishermen in the country,” he said.

Mr. Gyamfi, after receiving the cheque, extended his appreciation to the ministry and the bank for their continuous support to the farmers and fishermen in the country. 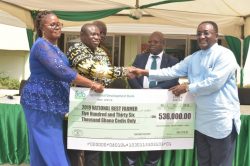 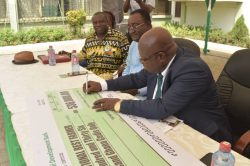